According to Forbes, Americans are living longer due to technology, medicine and public health. In 1950, the average American lived to be about 68. Nowadays, the average age is about 78.

In 2010, one fifth of Americans over age 65 reported that they had been the victim of a financial fraud or abuse. Cindy Hounsell of the Women’s Institute for a Secure Retirement states that “[older women] feel badly they have nothing to leave [their relatives], then someone calls up and says, ‘You just won!’ They all say the same thing – that’s why they fall for it”. 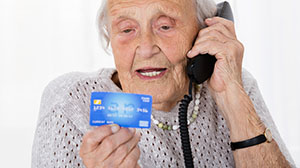 Older adults in general believe that people can be trusted according to an MIT study. This changes the brain. In a UCLA study, participants were shown faces that had cues as to their trustworthiness or untrustworthiness. Older participants perceived the untrustworthy faces as significantly more trustworthy and approachable than younger participants did. Decreased activity in the anterior insula portion of the brain in older adults may suggest that their awareness or assessment of risk is not as strong as that of their younger counterparts, which in turn may contribute to a greater vulnerability to fraud and scams. Warning signs to watch out for are aggressiveness or insistence of a telemarketer.

Another study by Michael Finke, John Howe and Sandra Huston found that although financial capacity seemed to decline with age, financial confidence did not; essentially, individuals still had faith in their own financial abilities even while they were eroding. This lack of awareness of their changing financial capacities could also put older adults at higher risk for financial fraud or abuse.

For more information on financial fraud, call 727-845-4166 to schedule your appointment at our offices in Trinity, Tampa, Land O Lakes or Springhill.